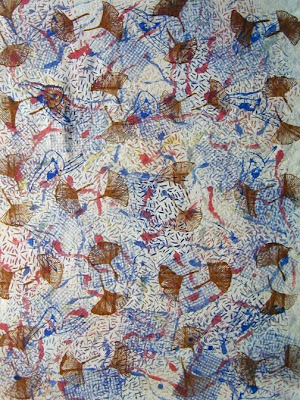 This one, as with the previous one, has been built up over several months. This is on a 100% linen that I found for $1/yd on the stack at Walmart. ( I bought the bolt) All except the gloppy streaks were done with thickened dyes and silkscreen. The gloppy was done by simply dripping thickened dyes off the end of a brush. 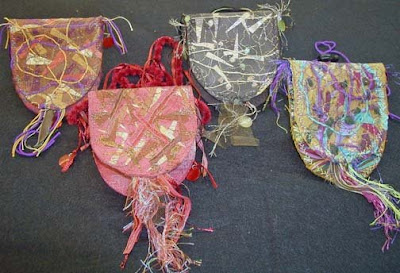 This is another idea I've been playing with. I had bought a bag similar to this at the Dairy Barn a few years ago. At the time I thought it was a small bag for evening use. As it turned out, it was more of a pocket to wear around your neck. Lately I have been wearing lots of clothes that don't seem to have pockets. That means nowhere to put my phone. So I decided to resurrect this concept using recent colorations. I found a small shop in Hardy, Arkansas that is carrying ( AND SELLING!!!!!) some of my smaller works. I brought them my little pockets-- we're calling them Posh Pockets. At a mere $18 I am hoping they fly off the rack.

I also bought a needle felting machine recently and have been playing around with it. I'm still breaking needles- argh. But it is a fun toy.

My immediate experiments are with Potato Dextrin. I've got several pieces batching right now and expect to receive some more potato dextrim powder in the mail today.

This is the longest I have allowed myself for pure experimenting in ages. While on this jag I am also playing with some disperse dyes, and am delving into the methods Jane Dunnewold and friends have used to laminate imagery and metal leaf to fabrics.

My next major actual project is to do three vertical panels that will have the silhouettes of 3 musicians who were sidemen to my husband's recording sessions. Since he normally plays alone on stage, these will hang as backdrops behind him-- giving the illusion that he is not alone on stage. There will be a stand-up bass, a clarinet or saxaphone, and a lead guitar. Perhaps even a drummer. I am hoping to incorporate some of these new methodoligies into that project. The plan is to use them on the CD cover. It is due out just before Christmas. Time to get cracking!
Posted by Susan Lumsden at Friday, September 26, 2008 No comments:

Labels: in between projects, voice, wanderings 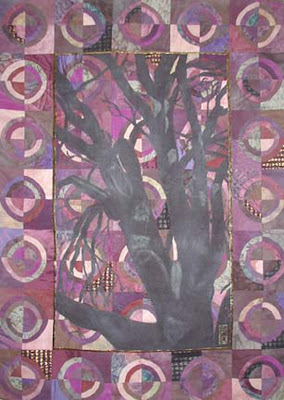 This was truly a roller coaster day. First the good news-- 2 of my works that I have been trying to get into shows for a while finally made it. My Bass Ackwards Series: Sunflower and Bee Balm were both accepted into the 4 state regional show at the Springfield Art Museum. They'll hang from mid October through mid January.
Now the disappointing news-- my quilt Full Moon/ Low Ceiling has been stolen from the wall of my exhibition at the Gillioz Theater. As it is an ongoing investigation there isn't much I can or should say about it except that it appears to have been stolen by a patron of the restaurant Tonic which is next to the theater and shares a lobby/ bathrooms. I am quite encouraged by the response from both the theater and the police. They are surprisingly optimistic about recovery. When I know more and am allowed to share I'll do so. In the mean time I am posting here so there is a place that can be easily referenced. The size is 49" H x 35" W.
This piece depicts the sky on one of those nights when the moon is very full and the clouds are quite low-- creating an eery mauvy glow.
While I am sad at the piece being out there without a legitimate owner I am hoping that it is an opportunity for it to bring joy to someone along its path. And yes-- I WILL prosecute!!!
But the thief cannot take away the joy I felt while creating this piece. I'll have that forever. This is one of my personal favorites.
In the mean time I am spending September experimenting with various resists. Potato dextrin is my current playmate. I'll post some images in a few days.
Posted by Susan Lumsden at Thursday, September 18, 2008 6 comments: 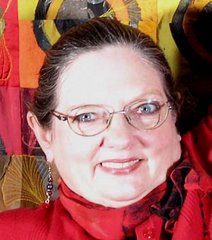